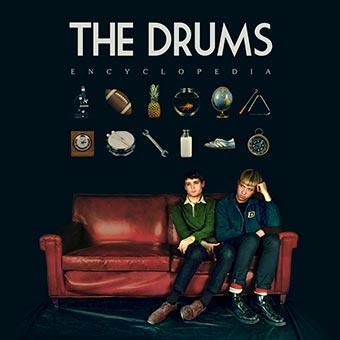 The Drums are Jonny Pierce and Jacob Graham, and their 3rd full length album "Encyclopedia" is set to be released September 23 in Canada. Emerging from Brooklyn in 2009, they smashed on the scene with their Summertime! EP that led to a spot on the BBC Sound of 2010 shortlist, The ShockWaves NME Tour, and the publication's Phillip Hall Radar Award. The Drums were also voted "Best Hope for 2010" in Pitchfork Media's 2009 Readers' Poll. The Drums' music often explores the themes of loss, nostalgia, redemption, vulnerability, and love - with critic's raves embracing both the lyrics and their sonic signature. This time around, they've embraced a darker sound while making it as grand and majestic as they please.

"Encyclopedia is full of magic and surprise while maintaining a serious, more weighty tone throughout," says Jonny. "We were feeling very angry, confused, and alone when we made this album; and we wanted to be very honest this time around, even if being honest meant making some people uncomfortable. We've left the beach for higher ground, always searching for hope." The upcoming LP marks the first time since the Summertime! EP that Jacob and Jonny were left to their own devices, without having to ask a soul for approval. The result is an exciting display of personal emotion and unashamed, majestic songwriting style.

View Archived Tour Dates
Emerging from Brooklyn via Florida in 2009, The Drums initially caught the ear of the indie world with their Summertime! EP. It was an escapist collection of beach pop fantasies; tracks suffused with a wistful, longing nostalgia that never pandered to cheap sentimentality. Their rise, particularly in the UK, was meteoric. Early buzz led to a prestigious spot on the BBC Sound of 2010 shortlist, followed in short succession by a slot on the Shockwaves NME Tour in 2009, and the publication's Phillip Hall Radar Award in early 2010, well before the album's release that summer.

Their terrific self-titled debut LP, released in June, was bifurcated into a first half dedicated to more upbeat pop songs, and a second half revealing a darker, more introspective side of the band. For the often difficult sophomore LP, the band sidestepped the pitfalls of a slump by recording it quickly, again self producing, often laying down tracks spontaneously in singer Jonny Pierce's kitchen. Following the departure of guitarist Adam Kessler, drummer Connor Hanwick switched to guitar, and guitarist Jacob Graham picked up his more natural instrument of synthesizers. Portamento, the new album, released just 14 months after their debut, reveals a band tugging lightly at the boundaries of their sound while still retaining their recognizable sonic signatures-sweet rushes of melody, winsome lyrics, and brittle synthesizer sheens colliding with wiry Spector-esque guitar and bass lines.

Pierce explains "The first EP there was this air of innocence. We were obsessed with vintage Americana sort of things. There were personal moments on the first album and EP, but it was very idea driven and conceptual. We wanted it to be cinematic. A scene from a movie, if you will. Now that's gone. The new album, it's like every song is a scene from real life. I think from beginning to end it's sort of autobiographical for me. I was able to be alone for a lot of this, and really write about myself. This new album touches on everything from my extreme religious roots to transgenderism to violence, and of course there's plenty of heartbreak stuff, which I couldn't get away from even if I tried."

The record's titled Portamento, which is a 17th century Italian term that denotes a vocal slide between two pitches. For Pierce, it takes on an additional, personal meaning. "Well it's got some significance," he says. "Jacob and I meeting as young boys with a shared love for Kraftwerk and Anything Box and Wendy Carlos, and these were all synth pioneers, and a common feature on old analogue systems was "Portamento." It dictates the travel time from one note to another, and we have always thought it was a beautiful word. It seems to come in to play with how we have transitioned in the last year, losing a guitarist, reforming the band, our personal lives, and the actual sound of the album travelling from one thing to the next." In a sense Pierce is describing loss, nostalgia, redemption, vulnerability, and love, which could well be a checklist of all the things that make The Drums matter.

The Drums have just finished recording their third full-length album which will see a release sometime this year. It is full of "magic and surprise while maintaining a serious, more weighty tone throughout" , says Jonny Pierce. The upcoming LP marks the first time since their critically acclaimed Summertime! EP, in 2009- that Jacob and Jonny were left up to their own devices, without having to ask a soul for approval. The result is an exciting display of personal emotion and unashamed, majestic songwriting style.